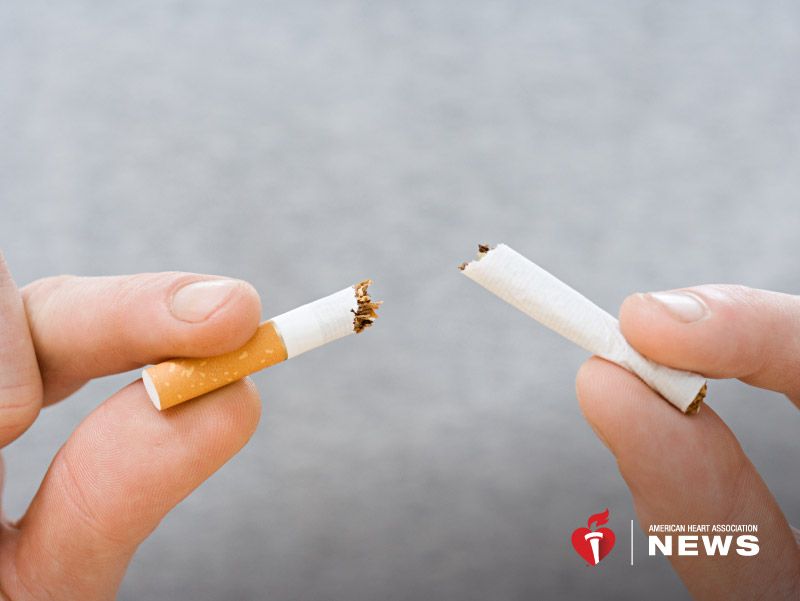 AHA: How to Stop Smoking … for Good

Nobody knows who first said, "To succeed, you first have to fail." But it's a phrase many smokers likely relate to.

About half of all smokers try to quit each year, according to federal data. But only about 7 percent are successful.

"We've heard about people who say, 'That's it!' and they stop for good. But that's pretty rare," said tobacco researcher John Dani. "The average person makes multiple attempts before they quit."

It is the nicotine in cigarettes that keeps people physically addicted. But there are multiple social and psychological factors that also play a role in determining why some smokers who decide to quit are successful while others aren't.

For women, weight gain is a common reason for relapse, said Dani, chair of the department of neuroscience at the Perelman School of Medicine at the University of Pennsylvania in Philadelphia.

He advises women and men to substitute exercise for food when battling the cravings and nervous energy that often accompany nicotine withdrawal.

"Healthy habits like running or walking or doing yoga are great alternatives," Dani said. "I know people who started walking the steps of their building at work instead of walking out to the parking lot to smoke a cigarette."

Thomas Payne, director of ACT Center for Tobacco Treatment, Education and Research at the University of Mississippi Medical Center in Jackson, said moments of extreme tension and strain often play a powerful role in why people return to smoking.

"Stress undermines our coping efforts and is often associated with more intense cravings," he said.

Getting enough sleep each night is essential in reducing stress and increasing a person's chance of quitting for good, he said. Trying to reduce stress with a glass of wine or beer, on the other hand, could make the problem worse.

"Even small amounts of alcohol are associated with an increased risk of relapsing because it causes our inhibitions to drop off a little bit," said Payne, who's also an investigator with the American Heart Association Tobacco Regulation and Addiction Center.

Studies show smokers have somewhat higher quitting success rates if they use interventions such as counseling; quit lines; nicotine replacement products such as gum, patches and lozenges; and prescription medications.

"Professional help can make all the difference in the world, and many insurance plans cover all or most of the costs involved," Payne said.

The key, he said, is for people to keep using these programs and products even after they've stopped using tobacco.

"Think of it like antibiotics: You need to keep taking it even if you feel great," Payne said. "A minimum of three months of usage is really what we're shooting for, and for many people, as long as six months may be the sweet spot."

"Just one often turns into one every couple of weeks, and then once a week, and pretty soon, they're smokers again," he said. "It's similar to how people start smoking in the first place."

Those who want to quit should also realize that setbacks are manageable.

"People can recover from a slip if they have a good mindset about it," Payne said. "The important thing is not to beat yourself up about it. Think about it as a learning opportunity. Recognize what happened that made you want a cigarette so badly and plan for how you'll react in similar situations down the road."

Every day, week and month a person goes without smoking, the better their chances of kicking nicotine addiction forever, experts say.

"There is never no risk of relapsing," Payne said. "But the greatest risk period is the first two weeks after quitting. And once a person gets past the first three months or so, relapse risk drops considerably."